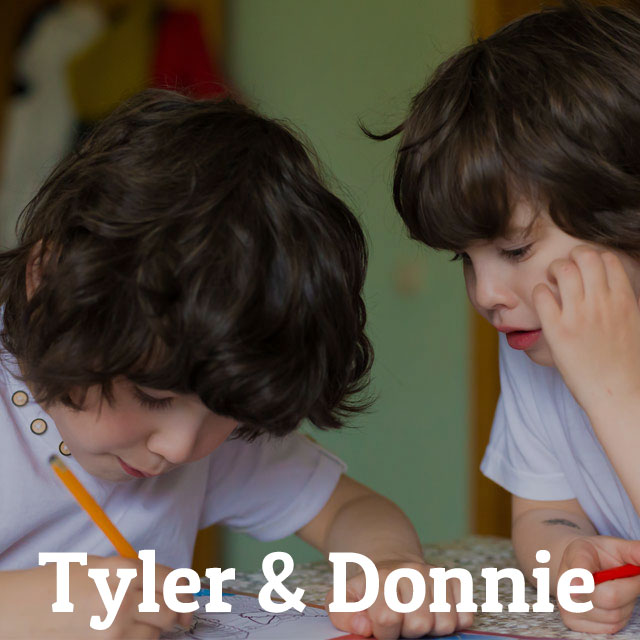 We have children in our program who, in spite of a caring parent, struggle against incredible odds, and whose lives are never easy or uncomplicated.

Donnie and Tyler are brothers. Tyler was 5 and Donnie 3 when we became involved. Donnie didn’t speak. Tyler parented. His instincts were that of an adult. He is what we know as ‘hyper-vigilant’, meaning that he can be in a room and know what is happening in any part of it. He can also tell you who in the room is in charge, ‘who’ has the most power. This skill comes from being in a home where you never know what will happen next.

The boy’s father, Harry, worked the midnight shift as a janitor. At times he drank too much. The mother was mentally unstable and was in and out of the hospital. They had a third child, less than a year old, who almost never got out of the crib. Harry worked hard at trying to keep it together. He was a good man and genuinely loved his kids.

Children’s Services became increasingly involved. One day, Tyler was picked up by the police, many blocks from his home. The family was placed under a supervision order through protection services. During this time, the boys thrived in the EvenStart program. Donnie started to form words, instead of sounds. Tyler was allowed to play and be a child.

When we had school events, the mom was never present.

One day, our teacher, Carolyn, was driving the school bus home and we pulled into the housing complex to let the boys off where they lived. Tyler got excited, telling us that we’d finally see his mother. At that same moment, the curtains were pulled back in the house and the mom was standing there without any clothing. Shortly after this incident, the mom went back to the hospital and the boys were placed in foster care. Harry was devastated.

We continued to work with the boys and we continued to drive into the complex as we had other children who lived there. One day, a bitterly cold and snowy winter day, Harry was walking down the main road where we were traveling. His hair was covered with snow and he wore only running shoes on his feet. He had walked to the foster home which was two districts over to visit the boys. We stopped and asked him if we could give him a lift home. He shook his head and told us that he couldn’t bear the thought of people seeing him on the bus when the boys weren’t with him anymore.

We continued during this time with the boy’s program. Harry visited and spent lots of time caring for his ill wife. Towards the end of the year, we were told that the boys were going under permanent guardianship, with the intent of placing them for adoption.

The next week, Harry came down to our school at St. Stephen’s Church.

He sat down and asked me if Corina, our bus driver, would adopt the boys. He was actively searching for a good place. He didn’t want to leave it to the government. I sat with Harry as he experienced this incomprehensible pain. All I could do was share some of what I understood. And what I understood was this:

The boys were deeply attached to him and loved him.
That would not change
The role he played in the boys’ lives, would change, but it didn’t have to end
Someone else would share the responsibility of parenting and he could take some of his time to just “have fun” with his boys.
And most importantly, the boys knew who their father was. They knew he loved them and that would never change.
Sometime, there are no “right” words. All you can do is be there and let them know that despite what happens, they are good human being who have done the best they could with the hand they were dealt.