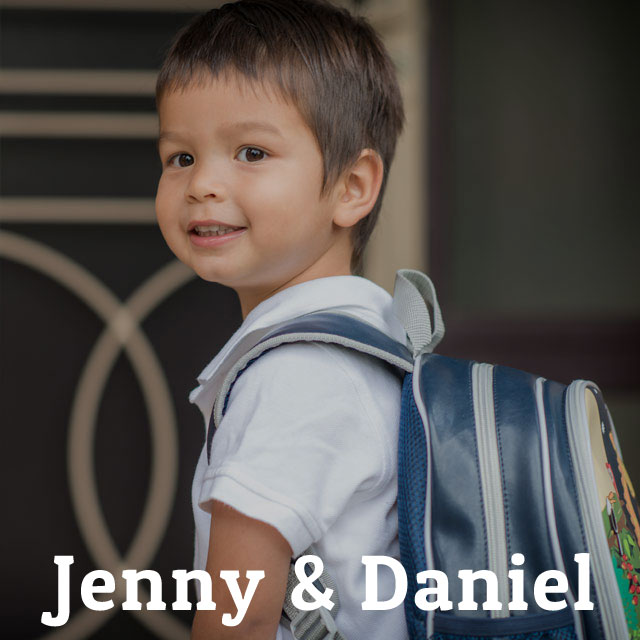 This is the story of Jenny and Daniel…

As the winds howled in Calgary and snow hit the thin bedroom window, Jenny pulled the covers tighter around her and her 3 year old son, Daniel. The bedroom was sparse – a single room that housed all of their belongings as part of a ‘shared accommodation’ arrangement with 3 other roommates. Along one wall sat two bins for clothing – one for Daniel, one for Jenny. Daniel’s favourite puzzle and ABC book were piled neatly in a corner. And, in the middle of the room lay a small sleeping mat, no thicker than a yoga mat, where Jenny and Daniel fell asleep together at the end of each day. By now, Jenny was used to restless nights, especially when Daniel had a hard time settling and staying asleep. She was used to the familiar ache she felt in her back when her alarm went off too early each morning. And, she had grown used to the struggle of getting Daniel up and ready in the mornings, accepting that this was now just part of her daily routine.

With the dark and silent night came Jenny’s reflection. When Daniel’s father left before he was born, that had marked the end of the physical and verbal abuse she had endured. But, it also brought a feeling of loneliness, and the new reality of being a single Mom to a son with complex needs. Money was tight, and that meant long hours in her job waitressing at a restaurant, sometimes 7 days a week. Besides supporting herself and Daniel, Jenny did her best to send any extra money home to Vietnam to help care for her sister and ailing father. Jenny was proud of her son, and was amazed at the rate Daniel was learning English words at school. But, she was frustrated that she did not learn at that same pace, and how she still struggled to express herself to others. Having just been through the process of getting a diagnosis of Developmental Delay for Daniel, Jenny had been overwhelmed navigating a difficult health care system. Times were challenging, and quality time with Daniel was not abundant between Jenny’s work and Daniel’s school and daycare. But, at the end of a long day, Jenny and Daniel lay on their mat on the floor…together. Close. Connected.

Our Family Support worker received the call…a generous donation of a twin bed had come our way, and the donor was wondering if we had anyone in mind that could use it. Jenny was overjoyed when she heard the news. Arranging an afternoon off from the restaurant, Jenny welcomed an excited group of volunteers as they loaded the bed into the house. And it wasn’t just “a bed.” It was a beautiful wooden frame, complete with drawers underneath and a bookshelf built into the headboard. It was new bedding…crisp sheets, warm blankets, and fluffy pillows. It signified hope. As Jenny and the volunteers assembled the bed, Daniel ran in and out of the bedroom, squealing in excitement. And when the bed was finally together, Daniel had the privilege of being the first to jump on it. The volunteers left that day as Daniel lay in the middle of the bed like a starfish, staring up at the ceiling…a beautiful grin on his face.

Jenny loves to talk about the difference the bed has made for her and Daniel…that something so simple could have such a huge impact. She shares how her self-esteem received a boost that day. Restless nights were replaced by peaceful sleeps. The cold, hard floor was replaced with a soft mattress and warm blankets. The bookshelf was filled with Daniel’s favourite stories, and this became part of the bedtime routine each night. And, nights were still spent together. Close. Connected. Jenny and Daniel.